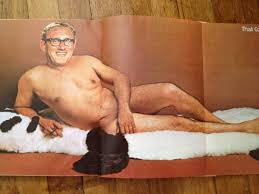 When you get the chance, treat yourself to Bo-Diddley’s heart-thumping rock ‘n roll rendition of the Willy Dixon song, You Can’t Judge a Book by The Cover. Enjoy Willy’s lyrics.

George Eliot originated the expression in her 1860 novel, The Mill on the Floss.

So far, copious searches on the Internet have yet to bail me out. It could be that I made it all up, propelled for some dark reason to invent a Wildesque fictional quotation, aided by the observation that Oscar Wilde loved nothing better than to flip conventional wisdom on its head.

I do know that many years ago, on break from college at home with my parents, I was having a meltdown reading The Price of Power, Seymour Hersh’s deeply-researched book that shreds the reputation of Dr. Henry Kissinger, when he served as Secretary of State under President Nixon’s administration during the Vietnam War. It zeroed in on his efforts building backdoor communications to our armed forces in Southeast Asia. It included a vignette of him personally picking out targets on the ground in the illegal bombing of Cambodia.

It was the same bombing campaign that triggered protests across the United States which sparked the tragedy at Kent State University in Ohio, when, on fifty years earlier on May 4, 1970, Ohio National Guardsmen pulled the trigger and shot four unarmed protesters dead. If you want a shining example of the “deep state”, there’s a real good one, documented in excruciating detail by a bonafide journalist, the same journalist who exposed the horrors of the Mai Lai massacre and helped turn the tide of public opinion against that particular pointless and as-it-turned-out unwinnable war.

Carolyn Poplett (AKA “mom”) is a North Carolina belle who married a Yankee lawyer. She managed to join the feminist movement in the 70s while hanging onto her femininity (she never burnt a single bra), author a pair of books on women power, and twice over a 50 year span rescue the local mental health agency from financial oblivion.

I was venting to Carolyn about Dr. Kissinger with steam gushing out of my ears. I was trying to summarize in words exactly how the secretary’s actions were so unfathomably reprehensible.

What she didn’t realize and I didn’t realize, up until I started this essay, was that the cover was Fake News—before we knew what to call it—manufactured by Harvard’s Lampoon. Only it was the good kind of fake news, which is otherwise called satire, a form of humor where as my father liked to say “many a truth is said in jest”. It captured the essence of the man and his boundless sense of his own self worth. Fake news or not, it was all that Carolyn needed to get a glimpse into his capacity for delusion.

Her remark served the magnificent purpose of suggesting the opposing notion, that sometimes you can tell a a book by its cover. If Oscar Wilde never said it, I transfer full credit to my mother.

So here we are, a scant few weeks from the 2020 Presidential election, when it would be most timely to have this knack Carolyn Poplett postulated, when last the United States was in a deep spiritual crisis, “to tell a book from its cover”.

To judge, you sometimes have to cast a keen eye on the surface.

I have invented ways to follow my mother’s precept. It’s not always easy and I still get fooled but with practice it gets easier. Here I provide you with a few examples:

Chris Wallace, on the other hand, gets a pass. While our national attention was still focused on Black Lives Matters, he called Dr. Cornel West onto his show because Chris Wallace is comfortable in his own skin, comfortable calling in a Harvard professor who is an expert on the racial divide. It is something that Sean Hannity, that other Fox News commentator, would never do for fear of making himself look bad. Chris also is amused by humankind. Watch the airing of that show and you will see Chris Wallace, smile and enjoy his conversation with Dr. West. You will see Dr. West get Chris to crack a smile. Sean, on the other hand, sees evil everywhere he bothers to look. He rarely smiles.

Fortunately, for persons who purport to follow the Christian faith, the litmus test is easy. Jesus Christ made it easy.

You have heard that it was said, ‘Love your neighbor and hate your enemy.’ But I tell you, love your enemies…

In the sphere of politics, the energy a candidate throws into casting shade on or disrespecting an opponent is the extent to which the candidate is “not loving the enemy”. In short, violating a fundamental Christian precept. That’s all you need to know. And you can make that judgement in less than eighteen seconds. When you do, you should have seconds to spare.

So, why are people so hopelessly bad at telling a book by its cover? My guess is that we neglect another adage, the adage to “heal ourselves”. I cannot think of a more frequently overlooked admonition than this piece of sound advice. Healing yourself, as any self-respecting psychiatrist or therapist will tell you, takes years of will and dedication. In other words, more of us are full of shaving cream than any one of us would care to admit.

Engagement in the lifelong process of healing yourself is a prerequisite for citizens who wish to make good judgments, sometimes snap judgments, effortless and confident judgments, like the ball coming out of the hands of Ray Allen late in the fourth quarter for a three-pointer. If you haven’t already set out on a journey of spiritual self-improvement, you’re too late for this election. Maybe you need to think about it. Maybe you need to sit this one out.